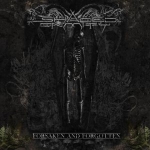 Seattle’s SHADED ENMITY issued this album back in 2013 and I was surprised it was up for a review, but it turns out Kolony Records have re-issued it. I caught this band several times back when I lived in Seattle and they could really tear it up for a crowd. Their drummer Simon Dorfman is an excellent time keeper and has some sick chops (he is now the drummer for the Seattle Death Metal band DRAWN AND QUARTERED). "Forsaken And Forgotten" would be the band’s last testament before the members went their separate ways and ending a 14 year career. These guys played a more melodic form of Death Metal with some parts being very progressive / technical and had a total of 4 albums and 2 demos. The band really invested nicely into the production of "Forsaken And Forgotten" as things are very clearly heard and not some garage sounding album. The guitar hooks and the drums are what caught my attention best from this album. They can be technical at times but they maintain the melodic side without going overboard like some bands tend to do. The band went as far as getting another Seattleite Warrel Dane (NEVERMORE) to lend vocals on the track bonus track ‘And Life Was Great…’ which was not found on the original release, but does appear on this Kolony Records version. The tracks that stood out for me were ‘Sadness In Summer Rain’, ‘And Life Was Great….’, and the majestic sounding ‘Indica Dreams’. Ultimately SHADED ENMITY were a solid band with a good sound. This last offering to me sounds like a good way for the band to say "So Long" and my understanding is that the band members moved on to greener pastures just adds to their musicianship ability. For those of you interested you can probably still find the band’s back catalog online or from the former band members. For more information check out the following sites: www.facebook.com/shadedenmity, http://shadedenmity.bandcamp.com, www.kolonyrecords.com