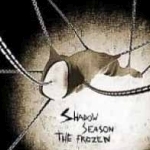 Black Metal again, but this time more interesting than usual. Vocalist / bassist Winter and guitarist Void seems to be Irish, but they recorded this MCD in Norway, with guest appearances by Norwegians musicians, namely Trym (EMPEROR / ZYKLON) on drums, together with Sanrabb (GEHENNA) and Dolgar (FORLORN) both doing some vocals. And precisely the vocals are the main interest of this disc: don’t expect ludicrous shrieks, but instead deep low-tuned imprecations similar to Death Metal grunts, this adding to the brutality of the music. SHADOW SEASON play typical Black Metal riffs, but they beneficiated of a very fleshy sound, the drums in particular sounding thick and fat, this is unusual when it comes to Black Metal records. Needless to say, the band play at full speed, the pacing often reminds what Frost and Hellhammer (the drummers, not the bands!) made us accustomed to. Judging a band by four tracks is not an easy task, but a full length of SHADOW SEASON should be an excellent surprise. The compositions all show interest, and are the antithesis of monotony. Lot of efforts have been made obviously to come up with the more professional sounding record possible. For the anecdote, note that the drum tracks were recorded in the famous Akkerhaugen studio, a place associated with the EMPEROR’s fame. In short, a good release by a promising band. Contact: shadowvoid@hotmail.com or jeremiahspillane@ireland.com (band) www.soundriot.net (label).