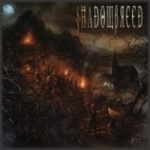 Everybody who’s a bit familiar with the Dutch Death Metal underground scene will probably know this Lumburgian Death Metal band. In the past, they already released a fine mini-CD, “The Light Of The Shadow” and already opened for rather big bands like for example IMMORTAL, MAYHEM and DEICIDE. “Only Shadows Remain” is their long-expected debut and is really entertaining I can tell you! You could describe SHADOWBREED’s music as very catchy, mainly mid-tempo Death Metal, though with a very own character. SHADOWBREED namely has already a very own sound – I can’t find any band to compare them to – which is a big plus these days. “Only Shadows Remain” offers 10 very catchy songs (+ intro), including a re-recording of the very strong ‘Path In The Dark’, ‘Avatar’ and ‘Lost Ways Regained’ (which you could already find on the picture-disc of “The Light Of The Shadow” as a bonus-track). Nevertheless, new tracks like ‘Battlerager’, ‘Warriors Blood’ or ‘Warcraft (After 2001 Stories)’ also manage to convince without any problem. The thing about SHADOWBREED is that they are capable to write songs which immediately stick in your head and are ‘easy’ to listen to, but don’t sound dull or boring at all. The sound and the production of this album (recorded at the Harrow Studio) is very good and also the cover (painted by Kris Verwimp) is very well done, suits the music and belongs to Kris’ best work. With a running time of about 34 minutes, this album may not last that long, but it doesn’t disturb at all because this way, the album doesn’t get boring. To sum it up, “Only Shadows Remain” is a more than fine debut and deserves to be heard. Check it out if you get the chance!