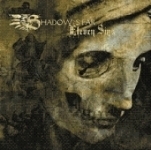 SHADOW’S FAR is not the wisest choice for a band name is it? As the world already knows the “Metal” band SHADOWSFALL, who assuredly still exist, are signed to Roadrunner Records and for whatever unknown reason, are huge, in both the States and Europe, within those circles of the Nu Metal / Hardcore circuits. And not to nitpick but SHADOW’S FAR as a moniker goes is dumb. It’s like choosing a band name like CHILDREN OF SODOM or LAMB OF DOG or MASTAGONE… take your pick they all suck and they all sound too alike to an already existing, signed, multiple album producing, and touring band. Musically SHADOW’S FAR is okay. Nothing to make you run out to your nearest music dealer and ask him to pre-order “Eleven Sins” with priority shipping. No, SHADOW’S FAR is just okay if you like mild, semi-melodic tempered Thrash Metal. Nothing you haven’t heard before or done by better. At times leaning towards AT THE GATES “Slaughter Of The Soul” and similar bands of that style and at other times SHADOW’S FAR remind me of SODOM around the “Tapping The Vein” album. All in all not that terribly bad but not that great either! Certainly nothing I would offer advisement of spending your hard earned money on. Especially if you already have those two albums in your collection, why do you need a Czechoslovakian rendering of these two records? As this CD spins further on I have noticed in the rhythm department SHADOW’S FAR does take a run at their namesake nemesis more than just a few times (minus the lead work SHADOWSFALL is renowned for) from the song ‘Celebrate Hate’ (track 7) onward to the album’s title track ‘Eleven Sins’ (track 10) and like I said even if you don’t like SHADOWSFALL or are from the other side of the EU like SHADOW’S FAR are, how can you not know of this Massachusetts band? They are everywhere! Especially on the Internet! Lastly, closing out this CD is an acoustic guitar piece entitled ‘Dust’ (no doubt the SHADOW’S FAR stage intro piece) and no doubt as well is exactly where it originated from, as it is so obviously ripped from KREATOR it’s pathetic. SHADOW’S FAR… More like SHADOW’S FART! Contact: Bruno Bomatter, Lehnplatz 18, 6460 Altdorf Czech Republic or www.stonepath-records.ch or www.s-i-f.ch