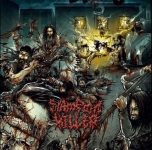 Do me a favor and try not to pigeon-hole this release and the band to the genre fun(ny) Grindcore. The six guys from the Czech Republic do not only have an odd moniker but also a pretty stupid album name. Accordingly song titles like ‘Vidal Sasoon Wash And Gore’ are just misleading. What we have got here is a deep bow to US American based Death Metal from the early nineties. Especially the debut by CANNIBAL CORPSE and the second SUFFOCATION full-length "Breeding The Spawn" can be seen as blueprints for "666 The Battle Of Discopylae". Fast played Death Metal with blast beats every few seconds, pulsating bass and from time to time some nice guitar solos. Ultra low-pitched grunting, only once in the short playing time some pig-squeals made an appearance. Even the sound catches the atmosphere of the above mentioned bands and their early works. The material can not thoroughly match up with "Eaten Back To Life" since some catchy and recognizable riffs or song-structures are completely missing and the vocals by Chris Barnes are unique. But it is pretty close to the material released back in those days and gives you definitely some kind of journey through time. The band emphasizes on being "anti-disco", whatever this means in detail. If SHAMPOON KILLER would have used a different name (it is the first release by the band) and maybe a more serious artwork and lyrics it would be the perfect old school attack. More info at: www.facebook.com/pages/shampoon-killer/517289204998456, hardbones@atlas.cz