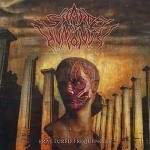 SHARDS OF HUMANITY is a three-piece from Memphis, Tennessee in the United States and active since 2009. After a self-released EP, the band now releases their first full-length via Unspeakable Axe Records. And this fine output is old school 90s influenced Death / Thrash Metal at its finest. The band has put so many good ideas into their seven songs that just one single spin is not enough to capture the whole picture. Due to the short length of the album, it is very easy to give it several spins even in a row, as the album is really growing from spin to spin. Their bastard consists as mentioned mainly of Florida styled Death Metal of the late 80s and early 90s mixed with some really cool Thrash tunes from the same era. The precise Thrash riffs inflame a real firework of brutal Metal combined with fast drumming and pounding double-bass and the aggressive vocals seem to be a mixture of Chuck Schuldiner and John Tardy. The vocals are balanced very well, so they do not take more space than all the other instruments. The songs feature all what the older Metalheads are longing for. Quick parts which make the head bang a bit as well as slow mid-tempo parts in which the band shows their technical nearly progressive skills and their obvious DEATH influences. Songs like ‘Aphoticism’ or ‘Internal Rot’ are already on a high level but also show that the band is still developing their skills, what is good as I think there is still a lot potential in their already fine songwriting to grow. Their solos and riffs are really killer so fans of old school US Death Metal and fans of technical Death Metal should really check the band out. The production is well done and powerful and the cover artwork is also fine so fans of above mentioned bands or old school sounding outfits like SKELETAL REMAINS should really support the band by buying this album. For more details, check the band at the following locations: www.facebook.com/shardsofhumanity, www.unspeakableaxerecords.com