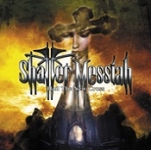 It’s been 6 long years since this Ohio based progressive (Thrash) Metal act SHATTER MESSIAH – led by Curran Murphy (ex – ANNIHILATOR, ex – NEVERMORE) released their last album, titled "God Burns Like Flesh" – and which by the way, was truly a magnificent marriage between progressive Heavy Metal and Thrash Metal. Within these past 6 years – while SHATTER MESSIAH’s line-up was shattered by somewhat radical member changes, i.e. 3/5 of the line-up was changed, the main motor of the band guitarist and songwriter Curran Murphy kept on writing new songs for the band’s next release, which happens to be this 8-track opus titled "Hail The New Cross", released on the legendary Belgian label Mausoleum Records this time. Having the core line-up remained same, Curran Murphy on guitar and Robert Falzano on drums, the new recruitings Michael Duncan on vocals, Pat Gibson on 2nd guitar and Jim Lewis on bass, SHATTER MESSIAH have been able to create a very tightly played, nicely innovative and well executed wholeness that in fact, might well be their best work to date song wise. Michael has already earned his spurs in such Heavy Metal acts as THUNDER TRIBE and POWND as vocalist – just like both Pat and Jim have their previous band experiences in some other bands. The big difference between this latest SHATTER MESSIAH record – and the band’s two previous albums is that as "Hail The New Cross" is easily their most progressive sounding album to this very date, it’s also their most mature sounding and most varied recording as well. The songs simply tend to flow better and more smoothly on this album, having no empty gaps, whatsoever – and what’s most important actually, the songs on "Hail The New Cross" can make a natural switch from one mood to the other (aggressive and attacking moments versus melodic and calm sections). Nothing on "Hail The New Cross" sounds forced at all, the way like they would have done something in terms of progressiveness’ sake only or something equivalent to that particular rule. About the band’s new vocalist Michael, it could be said that I didn’t even notice at first SHATTER MESSIAH had even changed their vocalist, from the ex – vocalist Greg to this new man behind the mic, Michael. I mean, Micheal’s own voice is quite similar to Greg’s indeed, so I wouldn’t wonder if some others of you didn’t realize this vocal change right away either. He’s got a great voice anyway. But yeah, "Hail The New Cross" is a pretty sweet ‘comeback record’ from SHATTER MESSIAH, having been 6 years away from the limelight… recording wise, I mean. If you have liked them before, undoubtedly you cannot wait for sinking your teeth into this new powerful cross of theirs either. SHATTER MESSIAH: www.facebook.com/shattermessiah, label: www.music-avenue.net/mausoleum