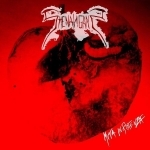 Italy has been the birthplace of many legendary acts which defined and gave characters to extreme Metal genres. Italian Punk, Hardcore, Crossover and very strong Thrash Metal veins highly contributed to the overall aesthetic, ideology and phenomena of these vital branches of music which was always into the forefront to refuse, resist, deny and showing aggression in musical form against the pitiful society and its self destructive doctrines. Bands like CRO-MAGS, CRYPTIC SLAUGHTER, DISCHARGE, ENGLISH DOGS, THE EXPLOITED, S.O.D, ANTI CIMEX, CRUMBSUCKERS were the forefathers of this defiant hold and also the most exposed ones. Italy had their own sons of dissenters in the form of PEGGIO PUNX, RAW POWER, DECLINO, CRIPPLE BASTARDS, JESTER BEAST who depth charged the 80s underground with music full of aggression and potency. Now, in this modern area, not many of us may be seeking deep into the Italian underground for Thrash / Hardcore acts and behind the spotlight SHENANIGANS was founded in early 2014 to play upsetting and nerve wrecking Thrash / Hardcore with lyrics written and sung in traditional Italian. They released their self-produced demo "Assenza Di Eroi" in 2015, and during October 2017, these four SHENANIGANS entered the Big Pine Creek Studio in Parma to record their first LP named "Muta In Potenza" which was released in September 2018, in co-operation with Earthquake Terror Noise records and distributed by Punishment 18. "Muta In Potenza" is a immaculate example of the musical tradition and aesthetics of Thrash / Hardcore, where the spirit transcends and the energy bursts out in a new form and texture. The record, even if it is a debut, is a highly passionate and professional work which proves that these guys have very precise thoughts and produced something as legends did in the eighties – to protest and dissect the crippled society through a musical language. Merciless riff attack, persistent and ever flowing bass rumbling, impulsive beat of drums, and the spine chilling voice that sings in Italian will expose you immediately and rip you apart from inside to prepare you for the mandatory resistance we need to show for cleansing of the so called society. From translation it’s evident that the lyrics are very meaningful and make it clear that the SHENANIGANS are not a group that just explores the surface of things, but goes far beyond to understand the mechanisms of what we call civil society. The titles like ‘Cammini Disgregati’ (Disintegrated Paths), ‘Io Non Esisto’ (I do not exist), ‘Bambino Soldato’ (Child soldier), ‘Assenza Di Eroi’ (Absence of Heroes), ‘Alfa 3’, ‘Senza Pace Senza Amore’ (Without Peace Without Love) proved their own claustrophobic fight with mind while comprehending and contemplating the society around. With a spirited mix of Italian classic Hardcore Punk and strong addition of Thrash Metal, they created a spit firing weapon of pure social revolt. Italy or abroad, now there is a lack of such an energetic and deep record, and by creating "Muta In Potenza" SHENANIGANS not only made the forefathers proud but also gave motivation to those who explore and seek vigor in this form of music to defend against evil dogmas. Find out more about the band at www.facebook.com/shenanigansit or explore their label page: www.earthquaketerrornoise.com.