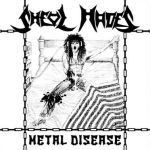 Lost Realm Records proceed with their quest to retrieve highly obscure releases from the eighties, and so here we have a mini CD with the demo recorded in 1986 by SHEOL HADES (both words having the same basic meaning, realm of the dead). It was their sole material to ever witness the light of day, six tracks with nearly 20 minutes of music in total. The band was from Arizona, and indeed what we have here is largely a piece of American Speed / Thrash Metal deeply entrenched in its place and time. As I began listening, I was reminded of NASTY SAVAGE, not only from the style of music and the level of energy and speed but also because the vocalist throws in high pitched screams amid his Thrash rasps and barks. But whereas Nasty Ronnie sounds much in control and includes falsetto sung parts, here there is a bit of an exaggerated contrast between the snarls and the frequent wails thrown in a bit out of nowhere. The band’s context is all too evident, as are the influences. In the title track the voice sounds much Mustaine like at times, but in ‘The Reaper’ the vocal interpretation is very close to Schmier (the song itself sounds more like germanic Thrash). ‘All By The Knife’ was screaming EXODUS’ ‘Piranha’ in my ears, and ‘Attack Of The Dead’ has much of a SLAYER ‘Black Magic’ feel to it… listen to that beginning, including the solo. The production is thin and primitive, and it sounds exactly as what it is… a demo tape from the eighties. But you can clearly distinguish each instrument, which is fortunate, because they were competent musicians. The bass shows effort put into it, and mainly the guitar player is inclined to stand out, with much prodigality in fine solos. The songs are good and varied, and full with the tenacity of a young band trying to find a standing right in the middle of the storm of the vibrant times when Thrash Metal was in its raging prime. So if you look back on this era with longing and if you enjoy uncovering the lost and buried uncorroded Metal of the past, this could be a nice addition to your listening experience. To know more, go to www.lostrealmrecords.com