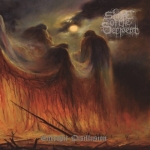 In this day and age, it is certainly not easy to establish yourself as an ambitious Death / Doom Metal band. The genre is just too diverse, too full of average bands and you easily lose track of the many active combos. With SHRINE OF THE SERPENT from Oregon, USA, another band enters the field of this genre and it takes a while to dig their material. These guys play simple but effective riffs and roll like black lava through their overlong songs. Their guitar sound reminiscent of the old PARADISE LOST demos and their song structures sometimes to the early albums of ESOTERIC or maybe DISEMBOWELMENT. The big problem with SHRINE OF THE SERPENT is their inability to write really good and original songs. I miss the thrilling atmosphere and incredible depth of bands such as THERGOTHON, SKEPTICISM and MOURNFUL CONGREGATION. A song like ‘Epoch Of Annihilation’ becomes so boring after three minutes that it hurts. It is a mystery to me, why the band does not recognize this pure mediocrity. As always: before recording an album, you should be sure that you have good riffs and ideas in stock to write good songs. This album is only okay, nothing more. www.facebook.com/shrineoftheserpent, www.memento-mori.es