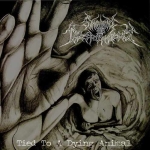 SHROUD OF DESPONDENCY
Tied To A Dying Animal
(self-financed)
92:05min

Sincerely, after some reading on SHROUD OF DESPONDENCY’s background, before reviewing their album, I was expecting some pretty straight up US Black Metal. 4 full length releases and a bunch of splits and demo tapes since their inception in 1999 gave SHROUD OF DESPONDENCY some credibility. Even though, their new double album, "Tied To A Dying Animal", is not too far from this, it sure incorporates a decent amount of creativity and a surprisingly good overall atmosphere. I am not a Black Metal fan. I got stuck in the first and (a bit of) the second generations of Black Metal. But despite the genre’s saturation, I found that this album is a breath of fresh (or toxic) air. Upon first listen of disc one (aka "Pt 1: For Innocence, Beauty, And Those Who Defile"), well, the influences are there. I found bits and pieces of DISSECTION, but they do have their heavy as hell passages really close to the Death Metal realm, a lot of harmonized guitar parts and eerie open chords and minor progressions. Much in the late 90s style, adding a lot of variation in their song structures. As stated before, the atmosphere is dense and dark. Production wise, the overall sound is clear, but raw and punchy. It is not your regular "trebly Black Metal" thin sound with no heaviness whatsoever. Every instrument is up front in the mix, with a nice presence of the vocals. The album showcases a bunch of good ideas performed in the right way. I really don’t know how to actually identify SHROUD OF DESPONDENCY since their brand of music reminded me of the old Greek Black Metal, but mixed with the trademark US Black Metal, even adding some progressive influences here and there. Now, here comes the tricky part: disc 2, entitled "Pt 2: For Those Who Leave And Find Better Devils" starts off with an acoustic song. A really good harmonized guitar riff with a string background and backing vocals. My first though was "ok, they are using leftover intros and / or outros from the first part". But oh was I wrong. This second disc is full of dark, majestic and even folk influenced hymns. It is unbelievable how the same band that ripped their way across disc one is also capable of delivering such amazing music. Part 2 adds a whole new dimension to the concept. It reminded me of the fabulous "Conan" movie scores in a lot of ways! Conclusion? SHROUD OF DESPONDENCY is one amazing band. And one tricky pony that surprised me with two sides of the same coin, completely different in approach, but totally coherent in concept and style. All I can say is that you must have this album. Even if you are not a Black Metal fan, I can assure it will surprise you the same way it surprised me. Excellent all the way through! And one of the best independent releases I’ve heard so far. You can find all further information on the band here: www.facebook.com/shroudofdespondency, http://shroudofdespondency.bandcamp.com