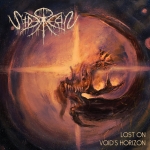 SIDEREAN is the new avatar of Ljubljana, Slovenia based TELEPORT. While TELEPORT itself is a phenomenal band and if you haven’t heard them, I strongly recommend that you check them out. With SIDEREAN, the members push the sound to the next level. Death Metal inspired by the Sci-Fi / cosmos isn’t new, we’ve had pioneers who released tremendous slabs like “The Key” which is one of my favourite albums. So SIDEREAN’s debut full length on Edged Circle Productions titled “Lost On Void’s Horizon” is a phenomenal dip into the extremities of the genre whilst being gentle at the same time. Have we ever used the phrase Soothing Death Metal? That is how I see this album, stellar non-conforming riffs that braid into an uncompromising rhythm. The album starts off with ‘Eolith’, a 9:15 minute track which flows as smooth as a river from the mountaintop. The vocals are harsh, yet mix in with the instrumentation, not taking up any layers over and above the sonic threshold. The rhythm is just spectacular and reminds you of THE CHASM, the masters of the genre. Every solo is gently placed to not disrupt the melody and to add on to the really strong rhythm section. The drumming is very fluid, directing the overall changes with no extra note wasted. As the build up’s reach a threshold, SIDEREAN break it up with introspective pieces (track # 2, an aptly titled ‘Traversing’) to slowly shift their messaging. Although this is a popular approach and not a new one, SIDEREAN use these spaces very well. We then come to the second longest track of the album at just over 9 minutes as well. Track # 3 ‘Lost On Void’s Horizon’ delivers just what the title promises, a journey into the unknown. Accompanied with guitars which literally engage like you like a story, maneuvering over the arcs of endlessness while dipping in and out of the tempo simultaneously showcasing their strength in songwriting. We’ve all heard long songs but SIDEREAN writes them in the most engaging way possible and it’s not easy to be that perfect with every single passing moment across Death Metal yet SIDEREAN does just that. As we move to track # 4, ‘Sidereal Evolution’ the band literally presents an ethereal intro that relaxes you to the journey into the abyss and just as your mind shifts, they batter your environment with punishing rhythm as an accompaniment. Fans of THE CHASM, OBSCURA and ARTIFICIAL BRAIN must check SIDEREAN out at the earliest. At just under 41 minutes, “Lost On Void’s Horizon” presents an excellent case for Death Metal on the whole and is a welcome release in 2021. This should easily be one of the best performances across the genre this year. Category: soundtrack to a cosmic expedition. For more information, please visit www.facebook.com/siderean or www.facebook.com/edgedcircleproductions