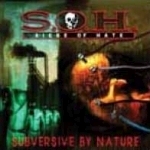 This album kind of turned back the clock for me, for it is musically pretty much along the lines of all those Crossover / Hard- / Grindcore acts of the mid eighties that I used to listen to in my search of even more extreme music back in those days. Think of bands like THE ACCÜSED, D.R.I., C.O.C., RAW POWER and so on, mixed with the intensity of early TERRORIZER, NAPALM DEATH and such and you’ll get an idea of what this four-piece from Brazil is all about. But what I used to like back then doesn’t really appeal to me in the same way nowadays anymore. Not because I grew old (which I did nevertheless, of course), but mainly because of Bruno Gabai’s vocal delivery which is more close to Hardcore than brutal Death / Grind. Apart from that, “Subversive By Nature” offers 20 rather short and to-the-point tracks of really refreshing and uncompromising musical extremity with an intelligent lyrical message and a welldone cover of D.R.I.’s ‘No Religion’. The album originally came out in October 2003 on Encore Records in South America and was licensed for all other territories by New Aeon Media now. So, if you’re into this kind of music, make sure to give them a listen. All further info you may find at www.siegeofhate.com or www.karmageddonmedia.com