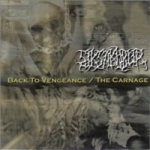 SIKSAKUBUR
Back To Vengeance / The Carnage
(From Beyond Productions / Displeased Records)
46:05min

In the label’s infosheet this fourpiece from Indonesia gets compared to CRYPTOPSY – a fact which I can’t confirm as I never really listened to CRYPTOPSY. But at least I can tell you that SIKSAKUBUR musically sounds extremely professional and matured and seems to consist of a bunch of highly talented musicians, especially considering the fact that this ain’t a real album, but a re-release of their two cassette only recordings from 2000 and 2001. It’s quite unbelievable how intense the music gets performed, how much brutality and technical skills can be discovered in their songwriting, especially if you have a look at the band’s pictures (these guys still look like a bunch of young kids!). SIKSAKUBUR definitely already play in the same league as many better known brutal US Death Metal masters! I’m not quite sure (as I only own a promo version of the album), but I suppose that the first eleven songs on this disc will be the newer material (as the quality is so much better), and therefore originally were to be found on "Back To Vengeance", while the remaining nine are probably from 2000’s "The Carnage" cassette. Back in those days the vocals were still a lot more in the frognoise vein, which they luckily seem to have changed for "Back To Vengeance", as that material features a deep grunting, and very convincing Death Metal voice already. Musically "Back To Vengeance" has furthermore a way better songwriting to offer, so that the band’s next regular release could become a highly interesting one, worth to look forward to. All further info you will get here: http://way.to/siksakubur or here: www.displeasedrecords.com/frombeyond.