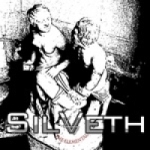 Really I am kind of at a loss with this band. After repeated spins of this disc I still don’t know what to think about SILVETH other then they seem to be trying too hard to please everyone in their practice room. Meaning, that whether you like Scandinavian melodic Death Metal, crushing Black Metal, or even what the kids are calling Mall-Core or Metal-Core these days. It’s all here for you. Mish-mashing riffs in every song presented, from almost every genre of Metal that you can think of, or might listen to into some kind of mental awareness game. A game where any given band member (or the listener for that matter) can see if he can remember what riff goes where or what’s coming next at any given point and see who can actually make it to the end of each song without getting lost. Honestly, from track one ‘Stone Gazer’ through to track three ‘Storm’ I contemplated getting up and going to the kitchen more than once, as I didn’t think I had enough popcorn in my bowl to help me get home. This said the real issue here obviously is with the overall songwriting. It’s all over the place. And I know there are those out there that like the frantic, A.D.D. inspired passages that for some unknown reason are so readily accepted in present day Metal songwriting, yet to these ears it’s just a hodgepodge of noise. No matter how well executed. ALICE COOPER has an advertisement on MTV, the basis of is the subject of what I am talking about here and it has to deal with bands who have played before him, and who have the inherent skill to play their instruments, and are totally capable but just can not deliver when it comes to the actual song played. That is the dilemma with SILVETH. Their songs aren’t strong enough to stand on their own, there’s nothing memorable about any of the five tracks on this disc. Each of these songs are as interchangeable as they are conversely disproportionate to logic. Rendering the listener ultimately flat-lined, unsatisfied and as empty as when the CD was first placed within the carriage. Contact: mereck@gmail.com or www.silveth.com or www.myspace.com/silveth or www.8th-sphere.com