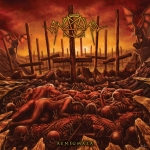 This band from Hungary is a fine example for persistence that pays off some day. After more than ten years and two demos, SIN OF GOD released their first EP in 2010 and the first full length “Limbus” two years later. Another four years passed by that lead to a deal with the very active Russian label Satanath Records, who released the new album “Aenigmata” in co-operation with MurdHer Records from Italy. And it seems the long break was not bad for SIN OF GOD, since the band from Ambrózfalva used the time to improve both their skills and their compositions. This lead to an album that should please any lover of technical Death Metal. Complex songwriting and technical abilities are the characteristics of “Aenigmata” that strike the eye. SIN OF GOD can’t deny the influence of the technical school of US Death Metal. Bands like IMMOLATION and even NILE are the ones that come to mind, in some moments it’s also CARCASS or KRISIUN. Those names aren’t that bad as a reference, and SIN OF GOD are smart enough to use these influences to create a sound that is not a mere copy. The whole album keeps a constantly high level and is thankfully not too long, since a style like theirs is very demanding in the long run, at least to someone like me who is more into straight and banging stuff. But the humble opinion of a simplicity loving guy like me shouldn’t keep an aficionado of technical stuff from checking out SIN OF GOD at www.facebook.com/sinofgodhu or http://sinofgod.bandcamp.com. For the labels, visit either www.satanath.com or www.facebook.com/murdherrecords