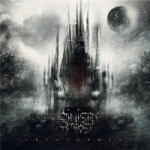 Out from the capital of Russia, Moscow, crawls out this symphonic Black Metal act named SINISTER FROST, whose debut album titled "Cryotorment" is such a joy to listen to. I am always relatively skeptical when it comes to finding out the most potential and interesting Black Metal bands out of the pack, but this Russian 4-piece band did surprise me on their debut full-length studio record in a positive way. Sure thing, SINISTER FROST have heard all about their DIMMU BORGIRs and EMPERORs, and even sucked a fair amount of influences from the whole arsenal of those 2 aforementioned Norwegian Black Metal giants, into their own sound. Strongly keyboard-laden and very atmospheric Black Metal is what they have got on offer on "Cryotorment" but then again there’s no way that we could point our fingers straight against these Russian Black Metallers to say they are guilty for this and that, as SINISTER FROST have more in them than just the shadows of DIMMU BORGIR or EMPEROR hanging above them musically. SINISTER FROST have adopted a good amount of Death and Thrash Metal elements for their sound as well, just to break out from the usual Black Metal mould a little bit. Ultimately SINISTER FROST do their Black Metal thing well, reaching people over different genre borders by their well crafted and produced Black Metal. At times they also tend to remind me of Eric Peterson’s side project DRAGONLORD due to all those different influences they have sucked in for the record, almost like being a Russian version of DRAGONLORD. Without saying much else about SINISTER FROST, let me just say in conclusion: definitely worth checking out. More about SINISTER FROST at: www.facebook.com/SinisterFrost, label: www.myspace.com/msrprod