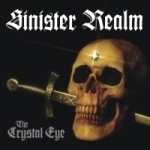 Pennsylvania-based Heavy / Doom Metal band SINISTER REALM hit us back with their 2nd album, titled “The Crystal Eye”, introducing 8 new songs on their new opus that – somewhat surprisingly, honestly blows their debut album out of the water, just no matter how good it was. “The Crystal Eye” basically continues from that musically rewarding ground where they left off on their debut full-length, sort of underlining even more the great musicianship the SINISTER REALM camp possesses in itself. The band’s mixture of traditional Heavy Metal and Doom Metal has reached such a perfect mixture on “The Crystal Eye” that it’s difficult to put the album away after spinning it through until the last epic-like song, ‘The Tower Is Burning’, has come out from the speakers. Strangely a tip of your finger always finds the repeat button – and there’s only SINISTER REALM to blame for it. Seriously, the band’s skills to combine some of the best elements of both traditional Heavy Metal (there’s a nice, MAIDEN-esque NWOBHM – flavor to their sound) – as well as Doom Metal à la CANDLEMASS, SORCERER and the likes, blends together very nicely indeed on their 2nd opus, leaving not much to be hoped for. SINISTER REALM simply reeks of musical awesomeness and ingeniousness on "The Crystal Eye" – and it’s actually relatively easy to run out all positive flavored superlatives while letting your mind fully sink into this absolutely bombastic yet so fantastic record. It’s just no matter how objectively one tries to judge "The Crystal Eye" as wholeness in its all gloriousness because in the end you always end up realizing how good this album truly is. I could review the whole record track by track, but then again it would be kinda unnecessary because each song on "The Crystal Eye" rules more than any lousy X-mas present you received from your grandparents during your own childhood. Get this record for yourself – and thank me afterwards for doing so. www.myspace.com/enterthesinisterrealm