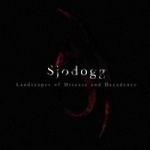 Sometimes music is closely connected with good / bad memories from the past and listening to the latest Osmose release I remember the times when nearly every Osmose release was a pure classic, easily explained by the fact that almost all Black Metal hordes from Scandinavia found their way to Beaurainville in France. In 2007 Osmose is still releasing fresh blood from all over the world but nearly all classic bands left Osmose to find the gold at the end of the rainbow somewhere else (except for Impaled Nazarene!). Their latest release is the debut from SJODOGG a band consisting of Enthral, Crest of Darkness and former The Flesh members and honestly speaking due to the fact that especially Enthral is in my opinion based on one of the rare jewels on the dark Norwegian sky I expect a lot from “Landscapes Of Disease And Decadence”. SJODOGG don’t disappoint the listener because “Landscapes…” shows how Black Metal can / must sound in 2007 to avoid the well known term “nice but nothing new”. The first two songs easily show the potential of this band by combining their trademarks; dark guitar walls flow together into acoustic parts – if you close your eyes you can feel the funeral fog all around you! I’m nearly sure that SJODOGG will agree to the assumption that Mayhem and Keep of Kalessin gave some inspiration to “Landscapes Of Disease And Decadence” but if a unworthy journarlist is naming some of the cult Black Metal bands to review their debut you should not complain! The whole album is really worth to find their fans even if you need three or four rounds to really get into SJODOGG’s universe. Osmose is maybe an old dragon in the business (I think the term rabbit is not completely matching) but they still have a hand for bands which could but should release their music to keep the “flames alive”! www.osmoseproductions.com