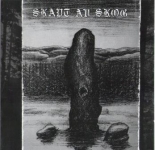 Norwegian duo SKAPT AV SKOG was a short-lived act that just existed sometime around the mid 90s, and probably just for a couple of years. They only recorded this unreleased 3-track EP in 1996, and disbanded after that. Now the grave of the band was opened, as the Polish underground Black Metal label Fallen Temple decided to put this out, 17 years later. Well, for the ‘trooest’ die-hard fanatics of some Norwegian (or Nordic) Black Metal sound, this may be a target worth collecting. For the rest, don’t even bother to put this release on your shopping lists, as this is just some awfully made, rehearsal standard shitty Black Metal. There’s nothing in them that could move me one way or another really. Oh, and my neighbor’s wonderful dog just chewed this disc as he, obviously mistakenly thought a nice toy was thrown to him for playing purposes. My bad. Uh, I feel sorry for him… or perhaps not. SKAPT AV SKOG is dead, so no urls are available for them. Hence get all of your necessary information about them from the label’s site: www.fallentemple.pl