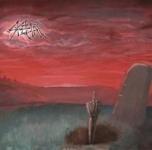 Young and potential Metal bands seem to pop up from everywhere like those giant-sized mushrooms after a highly toxic, acid rain. One of these more potentially glowing mushr… (err!), I mean Metal bands, in my humble opinion is SKELETAL; a young 4-piece Death / Thrash Metal band that released their self-titled 4-track promotional demo-CD last year – just to get the word out about the band a little bit, I guess. Right off the bat in the opening track, ‘Splattered To The Wall’, these young lads prove such a level of arousing potentiality they have in their combo: this is a very good attempt from them to sound old school Death Metal, mixed with some slices of Thrash Metal, reminding me of something along the lines of Dutch PESTILENCE and DEATH; both of these two bands early eras to be more precise with all of you. SKELETAL’s balanced fast- and mid-tempo-ish Death and Thrash Metal tends to sound relatively simple yet rather rough at times but is still able to do the needed trick to catch the listener’s attention anyway. The riffs are good – so are the solos (following nicely a similar type of soloing à la Chuck of DEATH) – and the songs basically manage to leave a pleasent enough aftertaste in your mouth, just like a delicious desert would do after an awful main meal. Plus, vocalist Samuel simply reeks heavily of Martin van Drunen’s powerful yet convincing death grunts, just much more than one could believe at first. ‘Carnage Of The Undead’, which closes this one promising chapter for these skilled four Finns, comes probably closest to the early PESTILENCE material, minus some overly technical aspects there were involved with PESTILENCE in the past. When it comes down to their true chances whether SKELETAL might be worth our time, I guess I pretty much answered to that question already. Please read between the lines if you can… www.myspace.com/skeletalband