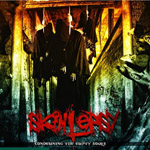 With ex – members of some well known Brazilian bands such as SIEGRID INGRID, NERVOCHAOS, ANTHARES, SKULLKRUSHER, PENTACROSTIC and OPERA, this power trio consisting of André Gubber (guitars and vocals), Evandro Junior (drums) and Luiz Berenguer (bass) have come up with 9 excellent songs in their debut album. They call their music "Brutal Thrash Metal", which is, surprisingly, a good tag for people who haven’t heard them before. After the first 2 listens, I would say they play a really intense brand of Death / Thrash, with two clear influences: early DEW-SCENTED and "Domination" – era MORBID ANGEL. No one would deny that such a mix sounds great; and it certainly does! First off, the production is perfect. It’s got a detailed mix, where every instrument comes along clearly, yet the general sound has a punchy and heavy bottom. Raw guitar / bass tone, in your face vocals and amazing drum work. There’s plenty of fat, unrelenting riffs and the pounding bass just rounds up everything. These guys really know how to play their instruments and their execution is flawless. Besides the excellent instrumental work, the vocals are a highlight. I do think they are a little too present in the final mix, but 2 or 3 songs into the album, I was already too much into it to notice. After the 5th listen, I can say that "Condemning The Empty Souls" is a great example of South American Metal. I really couldn’t find any weak spots, because it runs full force from start to finish. Another fact that I really liked is that, even though the band started back in 2003, there are no other influences but the ones I quoted above (well, after some more listens, I also found some similarities with country mates KRISIUN and TORTURE SQUAD). All these songs just sound timeless. It seems these guys have a pretty good idea of the music they want to play and they never have lost their path. You can’t go wrong with SKINLEPSY. They deserve the "Brutal Thrash Metal" tag for sure! Order their album from the label here: www.shinigamirecords.com.br or you can contact the band here: www.facebook.com/skinlepsy, www.reverbnation.com/skinlepsy