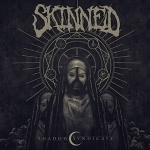 SKINNED is an underrated American brutal Death Metal band from Colorado. They started their career in 1996 and have a pretty large discography (mostly independent): five full length albums, one demo, two split releases, two EPs and one compilation. From 1996 to 2015 the band’s concept was focused on the typical brutal Death Metal ultra gory and splattered themes – something I really love – but now SKINNED have turned their lyrics and image towards more commercial stuff like conspiracy theories, mysteries, mental conflicts and social decadence. A very bad choice to me, because, both lyrically and visually, there’s nothing better than bowels, gore and corpses for a brutal Death Metal band. Anyway, SKINNED is back in 2018 with their last effort, entitled "Shadow Sindicate" and released through the French label XenoKorp Records. A total of ten songs for almost 40 minutes of overproduced and modern brutal Death Metal that mixes the classic American style with groovy, mid tempos and slammy parts, melodic stuff and modern Black / Death influences. Imagine a hybrid between the speed and technicality made popular by a band like ORIGIN and the melodic pseudo brutality of BEHEMOTH and KATAKLYSM. For sure SKINNED know how to play their instruments: they’re technical, but not as technical as ORIGIN or DECREPIT BIRTH, and yes they’re brutal but not as brutal as MALIGNANCY or INTERNAL SUFFERING. Their style stand in the middle of these genres and listening to "Shadow Sindicate" will leave you a sense of incompletion, as if these tracks aren’t going anywhere. The drumming is very brutal and aggressive with tons of blast beats, gravity blasts and double bass parts, but, as I said before, is all triggered and overproduced, so seeing them live would help a lot to judge their musicianship. The vocals are killer when it comes to guttural growlings, especially in the fast parts or in the slammy ones, but as for the rest of the album we have an average performance with some blackened screamings. There are also some atmospheric and slow parts here and there, but they don’t add anything to the final product. Regarding the guitars, we have fast, technical and brutal riffs (anything revolutionary), alternated with some melodic ones and a boring Black Metal vibe (truly out of place). In conclusion, would I buy this album? No, because I don’t like brutal Death Metal with melodic influences, not even mistery lyrics or groovy stuff. But if you’re into modern Death Metal, you’ll probably enjoy "Shadow Sindicate". www.facebook.com/skinnedofficial, www.xenokorp.com