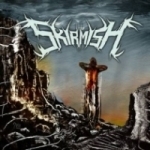 Finnish Thrash / Death Metal quintet SKIRMISH has been around since 2005, and released 3 EPs by themselves before Violent Journey Records got interested in them. This group’s debut album, "Through The Abacinated Eyes", does not leave many question marks hanging in the air why the owner of the label decided to attach SKIRMISH to their roster; there’s definitely something capturing in the band’s modern, strongly executed Thrash / Death Metal that at least riff-wise, tends to lean toward the later era EXODUS, without that Death Metal part naturally. SKIRMISH grinds and mixes bits from the intensity of Thrash Metal – and bits from the brutality of Death Metal into one solid and convincing wholeness of their own, in which certain dynamics get a major role to melt all musical ingredients tightly together. Guitarist Mikko Kupiainen must be a big fan of Gary Holt’s guitar playing style; his heavy-handed, crunchy and thrashing riffs seem to fly everywhere – back and forth, within the song structures – and it’s somewhat impossible to dislike this guy’s determination to get his message through on this many promises arousing slab per se. Jani Niskanen on vocals sounds darn convincing and killer too, using well and effectively both his death grunts (at times reminding amazingly much of Tomi Joutsen of AMORPHIS growling-wise) – as well as Thrash type of shrieks, adding simply lotsa sheer heaviness into the songs whereas his other troops have obviously done their best to maintain this certain level of punishing heaviness and brutality that overall dominate unshakably the material on the record. Out of the 8 tracks that are being featured for SKIRMISH’s debut full-length, it’s pretty tough to make a decision as far as choosing your personal highlights are concerned. But to me the best kicks were served by a mid-paced, strongly both EXODUS and AMORPHIS-flavored ‘Mystery In A Blazing Dream’ – and ‘Astral Infinity’, in which SKIRMISH’s whole capacity to thrash our hearts to little pieces, bursts out beautifully. "Through The Abacinated Eyes" is a very good grand opening from this talented Finnish Thrash / Death Metal camp – and I for one, am already crossing my fingers they could keep the flame burning bright for their forthcoming material, too. As usual, time will obviously tell… www.skirmishband.net, www.violentjourneyrecords.com