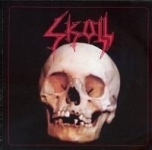 Hot on the hi-top heels of bands such as CRANIUM, DESEKRATOR, GUILLOTINE and WITCHTRAP arrive now the Colombian Thrashers SKULL. Heavily laden with fast picking, rapid double bass energy, almost dead-on "Zetro" Souza / EXODUS vocals and enough of the exuberance of that bygone era, ultimately making for a mildly entertaining half hour. Not the most original or expertly played Thrash Metal you have ever heard, but not exactly a band you would haul ass and leap to your stereo to remove either. Seven tracks are here for your banging attention plus two live songs captured from the "La Cruzada Del Fuego" festival, that happened on May 23, 2004. Contact: chatarradura@latinmail.com or traumarkhan@hotmail.com or Utterly Somber, P.O. Box 08419, Chicago, IL 60608 USA