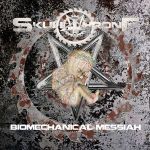 South America has often stood for impressive extreme Metal, Death, Black, Thrash or hybrid forms of these genres. The underground is full of new bands who come out with traditional or vaguely original styles. SKULLTHRONE hail from Bogotà, Colombia, and "Biomechanical Messiah" is their first full-length album and the only follower of their unique demo "Abyssmal Hymns For Satan" released in 2011. If you look at the cover artwork and the band logo before listening to the music, you can maybe expect some kind of Industrial Metal or something not too different than Nu Metal. However, when the opener ‘Imperial Satanic Artillery’ starts, you are hit by excessively fast drums mixed too loud compared to the other instruments and vocals. Some of you will also enjoy this style of gravity blast beat, but surely not me. Anyway, they try to mix Black and Death Metal with a modern approach, adapting themselves to the BEHEMOTH way with some added Norwegian influences. Unfortunately, the songwriting is the real handicap here. Despite the Colombian quartet show themselves as being good musicians, the sequences of riffs are often incoherent, and redundant, and most of the riffs themselves are terribly banal. You can also find some decent songs in the almost thirty-five minutes of this album, like the title-track or the concluding ‘Empire Of The Skull’, but the rest of the album is very weak in my opinion. Maybe SKULLTHRONE can please more indulgent listeners and Satan himself surely smiles at their blasphemous lyrics, I actually do, but it’s not enough. More information at: www.facebook.com/pages/skullthrone/271005296285009, www.satanath.com.