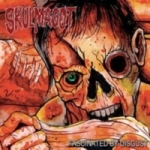 Trying to stay away from the classic Finnish sound, SKULMAGOT decided to go all the way down to the legendary Florida old school feeling to get their inspiration, at least music wise. This self-released effort started with ‘Forced Fed Testicles’ which quickly gives you an idea of what these guys were trying to achieve. However, I have to say that I still hear the unique European Death Metal sound production wise, but thats not a bad thing. Songs like ‘Fetid Female Floater’ could easily fit into your typical CANNIBAL CORPSE repertoire while the title track slows down a little bit but it’s still effective in the riffs department. It kind of reminds me of IMMOLATION. In conclusion, SKULMAGOT could find a nice spot among those bands who one way or the other refuse to follow a more safe path in terms of doing whatever their countrymates are doing and they could succeed at it. More information and sound samples at: http://skulmagot.bandcamp.com, www.facebook.com/skulmagot