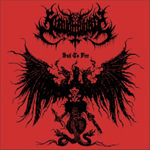 I don’t think that I let out a secret by telling you that the Metal scene in South America is extremely huge and very active. One of the oldest scenes exists in Chile, a country quite well known for its extreme Metal bands. PENTAGRAM CHILE are probably the best known extreme Metal band from this country, but there is also a huge underground. SLAUGHTBBATH from central Chile (about 100 kilometers south of the capital Santiago) is part of this underground. Around since 2002, this three piece looks back on a "typical" underground discography. Up to now, SLAUGHTBBATH released no less than four demos, four split releases (with DEMONIC RAGE, among others) and two EPs. But now it’s time for a first full length release, baptized "Hail To Fire". Well, "baptized" might be a wrong choice, since SLAUGHTBBATH are a Black Metal band of the oldest school, strongly influenced by those times, when there were no real boundaries between Black and Thrash Metal. In other words: simple, pure extreme Metal the way I like it. And SLAUGHTBBATH deliver fine stuff. The opener ‘Awakened To Slay’ shows the way the album walks and not just hints that ‘True Power Knows No Mercy’. With ‘Dethroned, Burnt And Spat Upon’, SLAUGHTBBATH prove that they learned their lessons from the Norwegian forefathers very well, some fine nods to DARKTHRONE on ‘Impale Them’ are included as well. ‘Doomsday Cenotaph’ and ‘Blackburn’ take no prisoners either, yet they don’t drown in a rush of speed. Fine simple mid tempo breaks ease the tension. The simplified title track and the final bloodbath ‘Barbaric Cruelty Reigns’ close a very enjoyable album for lovers of the simple stuff. This album is a very round thing, thanks to the not too long running time (love that!) and the quite natural production. "Hail To Fire" was released as a giant digipak CD, including poster and insert, by Proselytism and as a gatefold vinyl LP by French Chalice of Blood Angel Productions. Check them out at www.facebook.com/slaughtbbath or the label at www.proselytism.net 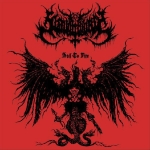 Old Temple re-issued SLAUGHTBBATH’s 2013 debut full length "Hail To Fire“ on CD this summer so it’s time for a nice little review of this South American plaguespreader. To start things off I heard lots of praising about this band, that they are one of the spearhead Chilean bands next to FORCE OF DARKNESS (one of the best extreme Metal bands out there today) and HADES ARCHER, hence my expectations were a bit bigger then usual. Unfortunatly the album was quite a disappointment. Throughout its 34:35min playing time you basically hear the same song over and over again which is a reason why I’m not going to discuss each song more in-depth. The record starts off with blast beats that continue until the fourth song ‘Impale Them’, after that its all back to blast beats again. The forelast track ‘Hail To Fire’ is again a bit of a diversion but all in all this record is basically one song cut up into 9 pieces stretched over the length of a longplayer. I’m definitely not a blast beat refusenik but too much is too much. Additionally to that dull drum inferno the sound is really bad in my ears. I wouldn’t be surprised if Angelo Sasso was invited to help them out. Guitarwise the record is just as dull as the rest… unfortunatly. In case you’re still interessted check out these links: www.facebook.com/slaughtbbath, www.oldtemple.com