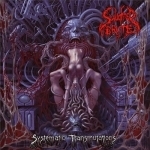 Uh… this appears to be a pretty tough release to review. Ukrainian SLAUGHTER BRUTE play the kind of brutal Death Metal that ain’t easy to digest at all. The band’s overly technical, partly jazzy and progressive Death Metal drops down into the same pool where bands like NECROPHAGIST, OBSCURA, PSYCROPTIC and such names, suck in their most twisted technical ideas – and eventually use them in their own songwriting processes. SLAUGHTER BRUTE’s unorthodox and nearly acrobatic Death Metal, accompanied with some digital effects here and there – like adding even more plain obscurity to their challenging Death Metal performance overall on this 2nd full-length album of theirs, pushes a listener against that one troublesome corner where you may start feeling the whole outcome of "Systematic Transmutations" could be probably too much to handle just during one listening session. I mean, there’s so much going on within SLAUGHTER BRUTE’s technically challenging songs that momentarily you may feel like throwing the disc out of the window without any regrets, just saying to yourself with a mild voice: "Now that was a good riddance…". A clear, lurking danger is that listening to this type of stuff may get you exhausted sooner than you’d even expect. With a more rested and focused mind, however, you get surely a more rewarding listening experience when spinning "Systematic Transmutations" in your music player. In other words, this album demands pretty much from its listener but with the right state of mind one may enjoy the heck out it for sure. I don’t wanna go on and explain more about the disc’s harder side of reaching enjoyment, but undoubtedly for the fans of modern technical and experimental Death Metal, here’s definitely something worth checking out. Home cave for SLAUGHTER BRUTE: www.facebook.com/slaughterbrute, label: www.morehate.com