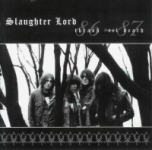 Correct me if I’m wrong, but it’s already been 21 years that KREATOR have lost their pleasure to kill i.e. their ability to write fast, catchy, simple yet effective songs. So, if you share my brutal but honest views, you should get that SLAUGHTER LORD CD. Oh what do I see? It’s a compilation of recordings done 20 years ago! I see, when KREATOR were falling from their throne, SLAUGHTER LORD wanted to replace them haha… Seriously, this Australian four piece formed during the mid 80s (as ONSLAUGHT originally), were delivering material very similar to early KREATOR, no doubt, yet they couldn’t compete with early KREATOR. But again just like it was for bands like DESECRATION (SF), LEGION OF DEATH and countless others from the same era, those bands were enjoyable back then because this style was fresh and that’s what counted more than anything else to fans who were listening to fast, total thrashing material. Little did we care about the quality of the songs, most of the time. I for one used to enjoy SLAUGHTER LORD quite a bit back then – although when their “Taste Of Blood” demo came out in 1987, I was already starting to be much more picky on my choices and tastes – but now I will call this very average Thrash Metal. They simply didn’t have the ability to pen material as shredding as let’s say DECAPITATION, TERRORIZER, NECROVORE or late POISON. You can argue with this as much as you want but if you take the time to compare the quality of the material without basing yourselves strictly on the era (considering that nowadays everything from the 80s must be praised to no end when it was largely ignored back then, funny huh?) and on the fast / thrashing aspect of things with the aforementioned bands, you will probably arrive at the same conclusion. Add to the lack of quality riffing, cheesy leads (incidentally guitarist Mick Burke ended up in MORTAL SIN a while later) and some not so hot drumming during the fast parts particularly and you get something very average. SLAUGHTER LORD were simply a 4th rate carbon copy of KREATOR, that’s where it ends for me. Those who collect everything that is Thrash related should get this for sure as it contains different studio recordings and rehearsal stuff in rather good quality and a well put together booklet. But if you’re looking for what I would call quality Thrash Metal, SLAUGHTER LORD doesn’t fit that category. Label website: www.invictusproductions.net