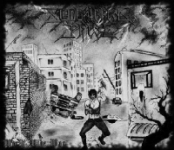 It’s hard to believe that SLAUGHTERED PRIEST is already three years old. Formed in 2007, these crazed Greeks were just in time for the Thrash revival. While critics of the movement (myself included) contend that the so-called return to Thrash is nothing more than nostalgia-fueled hype, there were stand outs who wrote good music. I confess I didn’t know of SLAUGHTERED PRIEST in 2007, but if I had, I would have included them in my list of “young Thrash bands who aren’t wimps”. While their music is more NIFELHEIM inspired, there’s a definite Bay Area and Germanic influence at work. For convenience’s sake, it would be easier to simply say “inspired by NIFELHEIM”, for NIFELHEIM are just like that. In any case, good album, good band, ’nuff said. slaughteredpriest.webs.com, www.time-before-time.com