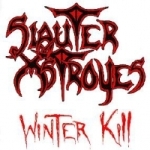 This is one of those albums which is criminally underrated and yet so special that it completely gripped someone’s soul and therefore sees the light of day again, 25 years after its first release. This time Rockadrome label (formerly Monster Records) felt this urge and released it on their sublabel Forged In Fire, specialised in 80s Heavy Metal. Well, what SLAUTER XSTROYES unleashes is more than just Heavy Metal, but a mix of Heavy Metal, Progressive (1985!) and Power Metal. It’s varying so much that I had difficulties placing them and yet it’s so mature and fresh that it’s hard to believe we haven’t heard much from them after this release and it took 14 years for 2nd album “Free The Beast” to be released. This one has Metal written all over it and that’s primarily by its unbelievable epicness. Everybody really knows how to handle his weapon and they make a deadly unit on their road to war and glory. The most distinguishable element on “Winter Kill” to me are the vocals by John Stewart. His performance is remarkable and I would even use the word legend. What a passion! Can you imagine ‘The Stage’ or ‘Charlotte’ with different vocals? Passion is the key word for the guys and you can still feel that today. No surprise its impact will work best when you really take your time for this one and I believe the full power of this band would manifest live on stage. They seem to be alive and kicking so let’s hope that they finally get the credit they deserve with their next opus. This 2009 version comes as an enhanced CD + ‘Black Rose And Thorns’ video. Check www.myspace.com/slauterxstroyesmusic, www.rockadrome.com for info and more gems from the past!