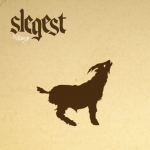 With Norwegian bands, you never really know what you’re going to get. And that’s not a bad thing. Sure, there are plenty of DARKTHRONE followers recording raw Black Metal with songs about traipsing through the woods. But there’s so much more than that. With SLEGEST’s second full-length "Vidsyn", you get something a little uncommon in blackened Metal. ‘I Fortida Sitt Lys’ starts out almost in a Rock’n’Roll vibe until the vocals kick in with a hint of LIKBLEK prevalent throughout. Listed as the only band member, Ese keeps a one-man rhythm going as if a full band were present. The faint sound of birds and goats introduces second track ‘Som I Eit Endelelikt’ which metamorphoses into a mid-tempo song of melody and Black Metal growling. ‘Du’, along with the previous track, is reminiscent of "Hinterland" era BLODSRIT. Matter of fact, much of this album harkens back to them from time to time. ‘Wolf’ is more of a rocker, continuing an album of non-blastbeats or aggressiveness. The simple riffs and steady Rock infused drumming carry "Vidsyn" through a consistent pace from beginning to end. ‘The Reanimator’ and ‘Inn I Uvissao’ saunter along while maintaining the same feel as prior tracks. The final track ‘Tenn Den Gamle Varde’ starts slowed down, then creeps forward into more of the same mid-tempo rhythm we’ve come to expect by album’s end. SLEGEST aren’t necessarily breaking new ground, but their constant flow of blackened Metal will sooth the soul without veering too far off the beaten path. For more info, check out www.slegest.no, www.facebook.com/slegest, www.darkessencerecords.no