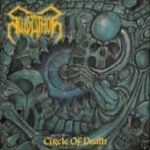 This is the second full length from Finnish SLUGATHOR following their debut “Unleashing The Slugathron” released in 2003. I somehow missed that one, maybe because I liked the first two 7″es but wasn’t exactly blown away by them. Well, this time SLUGATHOR deliver a fine slab of brutal and dark heavy Death Metal obviously influenced by the heydays of the Scandinavian, respectively European scene in the early 90s. In contrast to other bands that take their inspiration from that time but incorporate a good deal of melody, like for example HORRID, SLUGATHOR focus on sinister moods and crushing heaviness exclusively. The eight tracks recall the spirit of BOLT THROWER (minus the grind parts and also the leads sound different), early GRAVE, DEMIGOD (demo days) and also ASPHYX (“Asphyx”- era), balancing massive and doomy parts effectively. Tastefully placed, an eerie lead appears out of the midtempo to fast riff barrage here and there, conjuring up a morbid atmosphere and giving a further dark twist to the material like in the track ‘Crypt Of The Dead’. While fans of more modern Death Metal will most probably not get into this record due to its stoic and decisive neglect of blasts, US-styled riffing and triggered drums, “Circle Of Death” will appeal to all those lunatics who still worship the old ways of Death and who find their obscure and orthodox cravings answered by the records from FUNERUS, EVISCIUM, FUNEBRARUM and the likes. I must say this album proved to grow on me which each listening session – I just wished it was a bit longer and contained some more leads but it seems one of their guitarists was unfortunately killed during the recording so that may play a role in that. What remains is a strong album of pure Death Metal nevertheless. In the meantime, SLUGATHOR recruited some new members and if the band continues with this quality, the next album could be an absolutely crushing affair. www.slugathor.com.