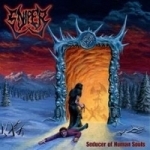 The monicker lead me to think of SNIPER as a band playing classic Thrash Metal all the way but it turned out that it’s just part of the truth. Actually, the album opens with a fast Black / Death riff and a looong scream, then a Thrash break comes, followed by grunts and then a midtempo, somewhat old school Death Metal riff and so on. So, the label of Black / Death / Thrash Metal is indeed justified and correct as the band mixes all three styles into their own. Admittedly, this approach is not exactly appealing to me but SNIPER are quite good songwriters and competent players – everything is tight and the classic soloing is indeed cool – no complaints on the technical level. The info sheet summarizes the sound of SNIPER as a mixture of SLAYER, old METALLICA, VADER and MASSACRE – quite fitting with the exception that there is no single trace of the Kam Lee – horde to be found here. It paid off that the band invested in Andy Classen to produce this effort as the sound is clear but powerful at the same time. Quite a nice mixture – my only points of criticism would be the sloppy logo and the corny artwork (matter of taste, though) and trading some of the melodic Scandinavian influences for more real Thrash wouldn’t hurt either. Ah, and closing the record with a ballad is a funny idea… but nothing more, urgh. Nevertheless worth checking out (especially for Thrash aficionados) as the band is obviously dedicated. www.sniper-metal.de offers several songs to judge for yourselves.