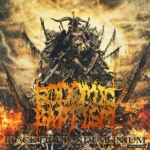 Belarus spawned SODOMIC BAPTISM, with their first full-length "Black Fire Pandemonium", started their album career off right with a blasting, crisp production that opens up the sound to let their Death Metal shine with all its chaotic glory. It’s definitely a conglomeration of tracks to play at the loudest decibel possible (for the most part). Alex Tetin (vocals) and Alexis Tetin (guitars and bass), which is fucking confusing by the way, form a monolithic band of crushing proportions, which is impressive for only one full album so far. "Black Fire Pandemonium" opens with a track of the same name with some possible backwards spoken growls before punching its way through our eardrums with a bludgeoning, blood-curdling, kick-in-the-nuts. I couldn’t ask for more in an album opener. The guitars chug, the drums pound, the vocals brutalize. ‘Angel Of Death’, with its drums at the beginning leading the way, projects a guitar driven wall of sound that continues the sucker-punch to the face. ‘Conception Of Beast’ changes it up a bit with a slowed down track of meandering growls and doomy guitars / drums. It picks up a little in the middle, but doesn’t have the fury from the previous tracks. In ‘Legion Noctis’ the guitars are all over the place in a more Tech Death approach, which isn’t a bad thing. ‘Daimon. The Descent Of Darkness (Part 1), with its crickets and spoken word leads into Part 2 of the same name with a charging monstrosity of a song that simply kicks the proverbial ass. ‘Tenebrae Primordiales’ is a grimy, dirty mass of a song that breathes pure Death Metal. The last track ‘Rex Stachus’ wraps it all up neatly in a tight little bow (made out of human intestines, that is). SODOMIC BAPTISM are at their best when they focus on the higher octane tracks. The slower songs, and tracks that waver off the furious path, could be easily removed from the album and replaced with more consistent upbeat tracks. Because, you know, we Death Metal fanatics simply want to fucking bleed sweat while banging our heads at a heavy rhythm. Otherwise, cheers to the band for writing and recording a damn good album. For more information, check out www.facebook.com/sodomicbaptism, www.facebook.com/ibdc666