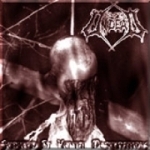 Sweden strikes again! I’m completely lacking in backing info about these guys apart from the fact that "Seduced By Mental Desecrations" is already SOIL OF THE UNDEAD’s second release. The band still seems to have line-up problems though as they’re working with a "mysterious" session vocalist (who calls himself "Slask" and hides behind a gasmask on the picture inside), but musically sound rather matured apart from that. This CD-R version features three songs (plus intro) of straight forward, extremely raw thrashing Death Metal. Nothing groundbreaking yet, but quite entertaining and certainly even more enjoyable in a live situation. The sound / production is ok as well and a rather cool idea actually is the origin of the title for this release. "Seduced By Mental Desecrations" is just a combination of words, courtesy of the three featured tunes on offer here (‘Mental Possession’, ‘Seduced By Blood’ and ‘Violent Desecration’). I have no idea if SOIL OF THE UNDEAD are selling this (or if it’s only meant for promotional purposes) and if they do, what they actually charge for it. But you can easily find that out yourselves by contacting them directly at these addresses: soiloftheundead.cjb.net, Chrille@soiloftheundead.cjb.net, Henke@soiloftheundead.cjb.net