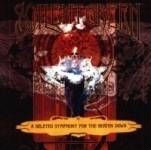 SOILENT GREEN
A Deleted Symphony For The Beaten Down
(Relapse Records)
33:33min

The first time I listened to this album I was hooked, so I bought it without much delay. I didn’t have any preconceived ideas about the kind of music SOILENT GREEN play, and I finally found a fresh and original band. This is their sophomore release, after the “Sewn Mouth Secret” out in 1998, also on Relapse. The word “extreme” is often used wrong these days, but it is totally appropriate to describe what is gong on throughout “A Deleted…” Imagine a mix of NAPALM DEATH blasting outbursts, OBITUARY crunching rhythms and CATHEDRAL sludgy Doom, and I guess you will get a somewhat precise idea about the SOILENT GREEN rather strange style. It is no wonder the band come from the now famous NOLA area, because the modern Doom overtones are dominant here. I even found some traces of the mighty DREAM DEATH (remember them?) on one track (‘Later Days’), pretty unusual I think. All the songs are structured around contrast between ultra slow parts and blasting ones, for a maximum destructive effect on your ears. I had the opportunity to briefly listen to the band previous effort, I can say they have kept basically the same style but they made huge improvement in the production department as the sound comes out thick and fat here, being somewhat blurred before. I would like to give a special mention to the vocals of Louis Benjamin Falgoust II, as he delivers his lines with a venomous hate a lot of Death Metal vocalists should be well inspired to be influenced by. SOILENT GREEN could appeal to a large audience, from the Doom fanatics to the Death Metal ones, without forgetting the Grindcore and Hardcore maniacs. The band manages to build an aura of mystery, reinforced by the design they stick with for all their cover arts and web site, based on the 1900 “Belle-Epoque” mannerism. I can only advise you to give SOILENT GREEN a try, I can guarantee you will not be disappointed. Buy and enjoy!