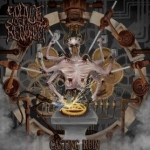 Although the band was founded back in 2001 and "Casting Ruin" is already the fourth full-length I never took notice of this trio from the United States Of America. But since none of their previous albums are reviewed on the VOICES website I guess most Death Metal lunatics do not know the band either. But now it is time to fill the yawning gap, because SOLACE OF REQUIEM are really awesome. They label their style as "Epic Fucking Brutality" and I totally agree with this characterization. The music is brutal and epic, because they play not just fast to be fast, slow down not just to be slow, play not just devastating riffs to be devastating, deliver versatile vocals not to be versatile. It is all done for the purpose to create epic and brutal music. Songwriting A+, so to say. You can listen to "Casting Ruin" again and again and again (like I did during the past days) and will still discover some new and unexpected aspects regarding vocals (all different kind of grunts, no shrieks or clean singing here), riffing, change of tempo and so on. If I remember correctly it was Trey Azagthoth (or maybe David Vincent) who once said that it is nonsense to play just fast, you need to have some slower parts, otherwise one does not notice the fast parts. If you can imagine an unholy bastard of bands like TEITANBLOOD, IMMOLATION, DRAWN AND QUARTERED, early CRYPTOPSY and Azagthoth – like riffing you will have vague vision of what to expect. The only weak point is the sound, could have been a little more sharped, sometimes it is kind of blurred. A last word regarding the cover artwork. I could not help laughing at the first time I saw it. But then I began to like it, because somehow it captures the spirit of Death Metal without taking itself to seriously. www.solreq.com, www.facebook.com/solaceofrequiem, www.vicisolum.com