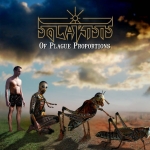 SOLARISIS is a Dutch band that mix their brutal Death Metal sound with a melodic undertone that decorated the first THE GATHERING album for example. ”Of Plague Proportions” is the second full length of this band from Enschede and was originally released in digital form and in own management. Online info learns that it was supposed to be released by Einheit Productions, but the band split up prior to this. Now, eight years later, the Russian GS Productions decided to release this album on silver after all (as a digipak, limited to 100 handnumbered copies). Their debut was released in 1999 and carries the interesting and probably scientifically correct title ”Holland Is Made Of Tofu”. Besides these, the band released the demos ”Ecliptica” and ”Illumination” (both 1996) and the EP ”Towards Extinction” (2002). Members of SOLARISIS now play or used to play in DEIFECATION, PULMONARY ABSCESS, SEVEN WATERS, COMMITMENT TO DARKNESS, BELOVED DEMIS and NOBASSAK to name a few. Despite their long years of existence, this is my first acquintance with SOLARISIS and tracks like ’Why Worship’ of ’Save A Silver Bullet’ turned out to be pretty cool. Bands that popped up while listening were CANNIBAL CORPSE, SEPTIC FLESH, PHLEBOTOMIZED, EDGE OF SANITY and even late CARCASS. On pretty much all fronts SOLARISIS convinced even though it wasn’t particular catchy stuff. But personally I haven’t much up with keyboards in Death Metal that boost a melodic sphere instead of a dark or devilish one. Still, it’s worth to check out this album and you shouldn’t be distracted by the bad album art. As a bonus it features the EP with five tracks that are already on this album. The production here is ok but dry compared with the one of the actual album which is heavy and clean. Check this out because it has a lot to offer when the last five bands mentioned are in your playlist without copying anything. It stands strong enough on its own. www.solarisis.nl, http://solarisismetal.bandcamp.com, www.gsp-music.com, http://gsproduction.bandcamp.com