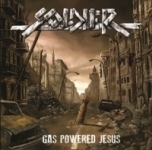 Refering to the album title you could easily think that this one is another Metal’n’Roll or alike release. But no need to worry here as this little disk is a quite solid Thrash Metal album. This bunch of Thrashers is hailing from the city of Oviedo and has been around since 2005 already. So they aren’t neither newcomers nor another faceless retro act even "Gas Powered Jesus" is their debut in their almost eight years band history. Having released a couple of demos the horde matured its songwriting abilities, refined and fine tuned it. The result is a very professional sounding ten tracker presenting excellent headbanging stuff. Even the influences of SOLDIER are clear in the glorious decade of Thrash (namely the 80s), their tracks have a slight modern approach which is absolutely not at all negative. The quartet offers a compact mix of heavy, rhythmic and groovy mid paced songs (e.g. the title track) as well as excellent uptempo Thrashers with sufficent speed (‘Maniac’ or ‘Between Two Masters’). All is very well executed with solid craftsmanship. The squad even was able to convince me with the only little bit calmer track ‘The Road’ which adds another facet and variation to the outfit’s sound. The production is quite dynamic and powerful and I think (in my humble opinion) it can compete with any other releases in the genre. In case you enjoy solid Thrash Metal with the right ballance of aggression and skill you should check this four piece out. You can get in touch with them at www.soldierband.net.