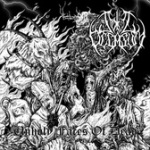 SOLIS OCCASUM is a solo project of Alexey Denisov from Russia, started in 2012, and this is his second album after "Orthodox Plague” from 2013. "Unholy Faces Of Dead” offers pretty old school monotone and primitive Black Metal. It reminds strongly of the typical Swedish and also Nordic style that flourished two decades ago, but mixed with vocals close to HAVOHEJ or MYSTICUM. These vocals and some weaker vocals seem to be harmfull, while it is not a bad release. Some parts are actually quite cool, just listen to ’Illusions Of The Christian World’, but on the other hand it’s far from original, repetitive and jumps from one cliché to the other. Still, instruments are handled solid and the songwriting is decent. If you like pounding stuff like BLACKWINDS this might be interesting, but I suspect it’s up to the Golumn like vocals to make the difference so be sure to check it out first. You can do so on http://vk.com/solisoccasum. Label contact: http://satanath.com/sodp