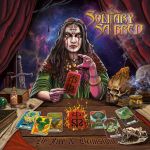 Fantasy, epic battles, warriors, swords, age old mythology has always been the essence of Heavy / Power / Speed Metal. This blended genre also resembles genuine ambition and enduring power; JAG PANZER, SANCTUARY, HELSTAR, BATTLEROAR, LIEGE LORD, SACRED STEEL, VIRGIN STEELE, MANILLA ROAD, ICED EARTH, KING DIAMOND – such names are living proof of that. Treading the path laid forth by these elder greats, SOLITARY SABRED returned again to release their third full length titled “By Fire & Brimstone”, this time in co-operation with Greek label No Remorse Records. Despite the fact that this review gave me my first encounter with the group, they are by no means a beginner. After their debut album “The Hero The Monster The Myth” in 2009 and its successor “Redemption Through Force”, released five years later, it’s been nearly six years since we’ve last heard from the Cypriots, but time hasn’t affected them one bit – “By Fire & Brimstone” picks up exactly where its predecessor “Redemption Through Force” left off. It’s everything you’d expect from mediterranean Epic Metal with its enormous riffs, enticing vocals, and signature lyrics. The album opener ‘Servants Of The Elder Gods’ is a passage back to early 90s VIRGIN STEELE, surely one of the album’s strongest export, where the chaos warriors descend to annihilate the world of man. It might draw parallels to religious fanaticism which regrettably still exists in the world. The chorus sounding like cultist chants, and being in dialogue with the voice. ROTTING CHRIST’S ‘In Yumen / Xibalba’ must have been a strong influence for that part of the song, especially the chanting on the intro! ‘Dissolutions’, which demonstrates a powerful atmosphere, driven by tasty riffing and one hell of a vocal performance, possibly the album’s boldest track. It has a little middle eastern nature in it, like the rhythm during the mid-part of it, which established their mediterranean roots. The album highlights are the two related ‘The Scarlet Citadel (Chronicles Of The Barbarian King Pt.I)’ and ‘Fyres Of Koth (Chronicles Of The Barbarian King Pt.II)’, in which singer Petros “Asgardlord” Lepto will remind of a fascinating mixture of King Diamond, James Rivera and Eric Adams. The album’s sound is powerful yet distinct, actually very clear to distinguish nearly every channel for the naked ear, provoke a feeling that – what you hear on the album, is what you hear live! Fantasy, sword & sorcery provides us a means on commenting real life and human nature. There’s courage, greed, lust, kindness, hatred and wonder all in equal measure. Undeniably, in “By Fire & Brimstone” that inner essence ensembled with all the theatricality, dexterity and power of Power / Speed ​​Metal and you will find these parallels hidden in the music and lyrics – obviously by those willing to find them. In view of the great class of this captivating jewel, which comes up with excellent artwork by Kostas Tsiakos (DEXTER WARD, WARLORD), SOLITARY SABRED again delivered an epic that shall appeal all passionate followers of traditional Metal. Explore more about the band at www.facebook.com/sabredmetal, and visit their label page at www.noremorse.gr.