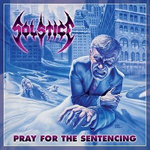 SOLSTICE from Florida, US was part of the triumvirate of Death / Thrash back in the day, I mean the early 90s from that region along with MALEVOLENT CREATION and RESURRECTION. Those were unique and while bands, of course there were the others like MORBID ANGEL and MONSTROSITY from that area, but save for MONSTROSITY’s debut, they weren’t stylistically similar outputs. SOLSTICE remained under the shadow of MALEVOLENT CREATION’s smashing debut “The Ten Commandments” and the band’s self-titled debut sounded like just that, except that it was more raw and less structured comparatively, especially in the light of what followed. RESURRECTION was another underrated band and remained so but unlike SOLSTICE, went on a recording hiatus and into oblivion. SOLSTICE thankfully lived to see another album, a better one in “Pray” which remains the band’s magnum opus, however severely underappreciated. It’s as good as any MALEVOLENT CREATION classic trio albums, namely “The Ten Commandments”, “Retribution” and even “Stillborn” despite the weak production. On the other hand, SOLSTICE delivered in spades and had little to no shortcomings in recording and only suffered from being left behind while the bigger band hogged the limelight and better distribution worldwide. Bands should’ve understood the importance of sticking around and releasing albums, which is also the case with INCUBUS that unfortunately underwent a name change to OPPROBRIUM, also a great band albeit unheralded. This review serves to throw light on the collective Death / Thrash Metal scene back in the day and that’s important because it shows you SOLSTICE’s place and relevance when it comes to its music. “Solstice”, the self-titled debut album (also known as "The Sentencing" – Frank) is raw, bustling with emotions and scraping sounds that can excite even a paralytic (no offense intended). It’s swinging with fervour, punchy riffing and headbang inducing breakdowns that are looked down upon nowadays by the purists, a bit of an irony since both induce the same symptoms. It makes one wonder whether the elitists favoured the darker bands like MORBID ANGEL in comparison, but probably not, because of a stronger sense of extreme Metal brotherhood back in the day. Our fans could take a note from that in our era. Coming back to the music, this was remarkable album in terms of expression and violent intent – it lived up to the Death / Thrash hype and comparison with MALEVOLENT CREATION’s debut. It was however no “Retribution” but the band thankfully released “Pray” which comes, very, very close. “Pray” is much better, the song structuring is more elaborate and the catchy parts are emphasized. This is something that would make a paraplegic get up and dance (no offense intended, again). And of course throw a subsequent fit full of rage and headbanging motions. This is one of the best albums ever released in that period along with those of INCUBUS, to give credit where it’s due. MALEVOLENT CREATION dipped in the mid-late 90s and this ranks higher than “Stillborn” where quality and enjoyment are concerned. It’s still not as structured as say RESURRECTION’s “Embalmed Existence” but this offers a simplistic, aggressive outburst which none can come close to. It’s just serving a purpose, a brilliant one when you look at it – it’s hard to recreate this kind of effortless energy and execution with a fervour unmatched after that era. So there you have it – two classic albums reissued by Divebomb Records, both remastered and with the same artwork used for the band’s self-titled debut. “Pray” is remixed as well as left in its original version, so there’s nothing to whine about since you get a choice with the original and remixed version. I’m partial to the old school sound but the newer version sounds powerful too. There’s no reason to not buy this unless you’re a person who’s a Metalhead who doesn’t appreciate the quality and dedication of this kind of music which can’t be recreated nowadays. It’s a bygone era, one that must only be cherished and replayed in all their essence and value. www.facebook.com/solsticefl, www.divebombrecords.com, www.facebook.com/divebombrecords