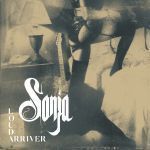 Sonja is the Russian pet form of the female first name Sophia, which means “wisdom”. But for me it is juts a simple prename and I do not know if it is really a good idea to give a band such a trivial name and if it really needs such a clichéd cover. What I do know, however, is that the music on “Loud Arriver” outclasses many, if not the most, wannabe early 1980s Hard Rock / Heavy Metal bands I have been listening to lately. As if it was the easiest thing in the world, SONJA throw out one great riff after another. Every song on this debut has its own charm, be it more epic, more powerful or more melancholic. Melancholy? Yes, Gothic Rock has a certain share in the overall work of art. For sure not my favorite style. But as long as there are first class Heavy Metal anthems like ‘Daughter Of The Morning Star’, ‘Nylon Nights’ or the title track, I don’t have a problem with that. On the contrary, the variety between the styles makes things interesting. Another quality feature of “Loud Arriver” is the fact that I still discover something new after listening to it dozens of times times and the songs simply do not get boring. By the way, main composer, singer and guitarist Melissa Moore, formerly a member of ABSU, founded the band as side-project in 2014. So no beginners at work. No Beginner is also the producer Arthur Rizk, playing in ETERNAL CHAMPION and SUMMERLAND and producer of the latest KREATOR album, to mention the most famous one. If you like it independent, have a soft spot for those special eighties riffs and are not afraid of Hard Rock, then this album is warmly recommended. For more information please visit www.facebook.com/sonjabooking, www.facebook.com/cruzdelsurmusic