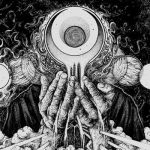 Thankfully the debut by SONS OF A WANTED MAN is released by the long-familiar label Les Acteurs De L’Ombre Productions, so the trio has a good basis to get the attention an album like “Kenoma” deserves. Traveling the paths of Post Black Metal, the band is following the steps of SATYRICON, ENSLAVED and many other bands which developed and enhanced the style of the second wave of Black Metal. Using more complex song structures, letting the guitars evolve away from the tremolo picking style and creating atmosphere a bit different from sheer aggression or dark, despondent feelings. Not to forget the versatile vocals, even clean vocals are no longer a taboo. Having in mind that this output is the band’s first full-length the result is even more amazing. SONS OF A WANTED MAN are painting an impressive panorama, off the cuff the band delivered the same quality the listener is used from bands like BORKNAGAR, SOLSTAFIR and other more well-known acts. Especially the vocalist does not need to hide behind names like Simen Hestnæs (aka ICS Vortex) or Andreas ‘Vintersorg’ Hedlund. The six tracks (plus outro) are convincing with constant change round traditional second wave Black Metal and the music nowadays is summarized under the term Post Black Metal. Personally I dislike this term, anyone ever heard of Post Heavy Metal or Post Death Metal? But since it is established it is the best sub-genre to pinpoint the music presented on “Kenoma”. To me the SONS OF A WANTED MAN are combining the best of two worlds – traditional and modern Black Metal. An therefore I am even excusing the silly band name. Enough written, visit www.facebook.com/soawm and www.facebook.com/ladloproductions and discover one the most promising releases in early 2020.