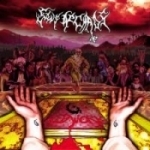 The Death Metal brutality and technical approach of bands in the CANNIBAL CORPSE / MORBID ANGEL vein, mixed with the twisted vocal sickness of early CARCASS and a couple of disharmonic elements à la old VOIVOD (‘Path Of Disgrace’, ‘Redwork’) – that’s kinda what you get from SONS OF CHAOS, another rather brutal outfit from California. “Redwork” is already their second album (following the release of a demo and a self financed / self released debut offering) and delivers approx. half an hour of technically impressive executed and fairly well produced US-style Death Metal. The album kicks off very promising and energetic, but unfortunately looses a little of this freshness towards the end. But generally the raw overall attitude and varied vocal delivery (deep grunts vs. aggressive screaming) works out pretty good. So all in all this is still a fine offering from a hungry three piece certainly to keep an eye on. Quite ridiculous is the obvious paranoia of their label Bloodsoaked Records though – in order to prevent fanzine / magazine editors from re-selling their (un)holy product they not only cut off a big part of the CD inlay card, they also handwrote “promo” in big letters on the front and (!) backside of this release… Well, at least they forgot to put something on the disk itself and I can sell that without the packaging now ; -) You can get in touch with the label at: www.bloodsoaked.net. Band contact: www.sonsofchaos.net