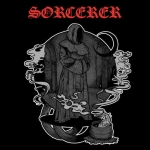 Originally released way back in 1995 by Brainticket Records, owned by one of the SOLITUDE AETERNUS guys, this obscure gem of Doom Metal resurrects again for those who missed it the first time. Lucky me I still have that CD (for some strange reason though the RAINBOW cover ‘Stargazer’ isn’t included on this re-release, but instead you’ll get the two tracks ‘Far Beyond’ and ‘Highlander’ that aren’t on the Brainticket release – Frank). Originally this was their demos to have an album worth of material. And for being demos, even back then, this is some great Heavy / Doom Metal in the tradition of CANDLEMASS and BLACK SABBATH with great vocals. Defined by catchy riffs and choruses. Members of the band have been involved in others acts such as THERION, SUNDOWN and TIAMAT to name a few, so back in the day one can think this was more of a project rather than a band. As with many bands in the same style, sometimes the music becomes a bit monotonous, specially in the slower sections, but the band has many upper tempos that make things move. As a matter of fact there is also a strong Power Metal influence in many places. It has a great etherial aura in many songs like ‘Queen In Black’. There are some records that with time become better, and that is something that happens with this one. As it is I will consider it a killer recording, if maybe this was not a demo probably the guitars would be heavier, but I am not sure if speakers will be up to the task. All seekers of heaviness and gloom, and true Metal fans at heart are adviced to discover this killer release. And, to make the journey complete, the band is active and has already released their debut album “In The Shadow Of The Inverted Cross” which follows what the band was doing 20 years ago… Doom knows no time. www.facebook.com/sorcererdoom, www.hammerheart.com