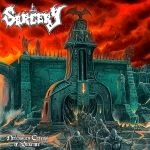 Swedish SORCERY released their debut album back in 1991… they were part of that incredible Death Metal invasion from Sweden… and then, silence. They returned again in 2009 and in 2011 they released a new album “Arrival At Six”, which I must admit, although loyal to the style, had a sound, specially in the vocals, that made them sound a bit Deathcore-ish, and the production on the guitars was not as crunchy as it was needed. Three years later they returned with “Garden Of Bones” and oh yes, they were back again, some brutal, crunchy Death Metal only the Swedes can do, and even the vocals sounded better. This time a good dose of old school Thrash was added, but in the right way. So enter a new album, if it is not broken, why the hell fix it? This new album continues where the last one started and in this case it is just good. The very first riffs and you can tell that they are Swedish. That HM to 10 distortion pedal sound is all over the place. And even more, this time all the songs will make you say DISMEMBER, ENTOMBED, GRAVE, UNLEASHED and so on and so on. Is it a bad thing? Not at all! I do not care that they are not original, as alas, they were also part of that sound. A good song is a good song, period. Yes, sometimes it is so strange, parts of the music sound too much like others, but that’s it. The style cannot go so far without being a joke, so they keep it safe. And the riffs, oh yes, the great riffs. Few band are able to come up with so many good riffs, no matter if they sound borrowed or adapted, they are now from SORCERY and that is what counts. This time the vocals are more in the vein of their great debut (hey it’s the same vocalist, so I guess age has something to do until he hits the spot) and no longer have that tough-man approach and are more within the Death Metal realms (unfortunately they got buried a bit too much in the mix for my taste – Frank). Also I feel the production this time is right on with the guitars crushing craniums all way around. There are less of those Thrash sounds found on the previous works, yet still the morbid melody is there. Again an impressive artwork comes with this release on none other than Mr. Dave Rotten’s (of AVULSED) label Xtreem Music. A great release and a must for Death Metal fans. www.facebook.com/sorcerydeathmetal, www.xtreemmusic.com