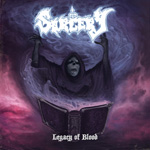 It’s re-issue time again, my dear people! In case you missed a classic Swedish Death Metal release of the days of very old, you now have the chance (again) to listen to the first vinyl offerings from Gävles very own SORCERY. After three demos between 1987 and 1989, this quintet released a 7" in 1990 and their first album a year later. But both records, the "Rivers Of The Dead" 7" and the "Bloodchilling Tales" LP, were done by very small labels (Thrash Records, resp. Underground Records) and so they were out of print soon and became rare collectors items. Now Blood Harvest makes both of them available again on one vinyl album, with the dedicated guys at Xtreem Music taking over the CD deal. The fact that the "Bloodchilling Tales" album was recorded at Sunlight Studios by Tomas Skogsberg leads to a certain expectation for sure. And these expectations are by no means disappointed by the tales SORCERY tell. Of course we find all the typical trademarks of a Sunlight Death Metal recording, but SORCERY managed to give the sound their own special note, due to the fact that they originally started as a Thrash Metal band. Songs like ‘Legacy Of Blood’ (the name giver of this compilation), ‘Dragons Of The Burning Twilight’, ‘Lucifer’s Legions’ or ‘By These Words’ are pure joy of Death, even though they are more than two decades of age now. But stuff like this is timeless, and SORCERY took their stand in the test of time for sure. They were at the eye level with bands like THERION, DISMEMBER or EPITAPH back then and with a bigger and better distributed label at their side, they might have become as big as they deserved. Both songs from the "Rivers Of The Dead" 7" were featured on the album as well. But I like the EP versions even a little better than the album versions, since the Thrash Metal roots of SORCERY are sticking out a little more here, and the raw sound fits especially the title track splendidly. Anybody who liked the lately done EXCRUCIATE reissues will also like this re-release for sure. And in contrary to EXCRUCIATE, SORCERY are pretty active again and I should dig their new album "Arrival At Six" soon, since listening again to "Legacy Of Blood" whetted my appetite for more. Check the band at: www.facebook.com/pages/sorcery/308658977440 and the labels at: www.bloodharvest.se, www.xtreemmusic.com